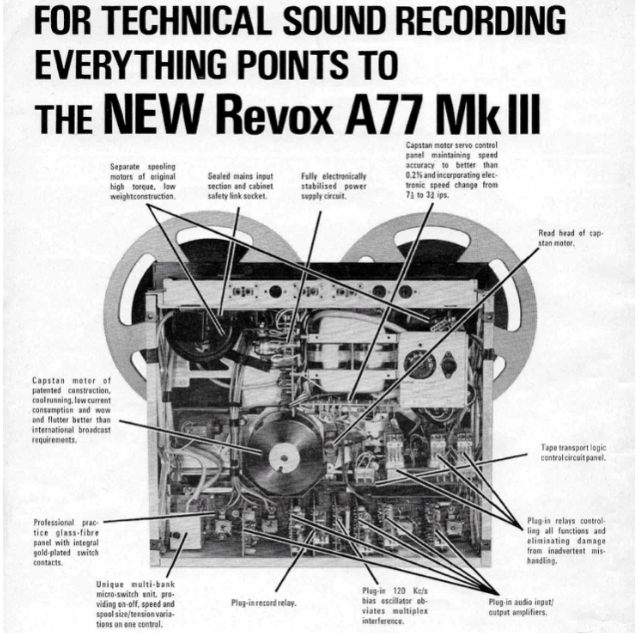 Once upon a time, studio quality voiceover recording was, like any kind of recording, the preserve of national broadcasters, big recording studios and wealthy amateurs. This was partly because of the sheer cost of professional equipment; you could buy (or make) a hobbyist’s tape machine at reasonable cost but reproducing sound even vaguely accurately was very expensive.

This was because high-grade equipment was made in very small quantities by engineers in lab coats – it was hard to achieve the mechanical and electrical tolerances needed for good audio reproduction.

So, if you were an amateur musician in the late 1960s and you wanted to record the soirees you took part in (yes, this really happened), you might buy a Revox A77 tape recorder and a pair of STC 4038 microphones. With stands, cabling and a decent pair of headphones the cost might be £500, which sounds a lot even before you add inflation – but comes to a staggering £7640 in today’s money.

However the world has changed in the last 30 years. Mechanical components barely figure in the recording process, large-scale integration reduces component counts, mechanised assembly cuts out the people in lab coats, and globalisation means we can buy equipment made at vastly lower labour costs in the other side of the world.

As a result you can achieve similar quality to that £7640 recording kit with a little stereo recorder like the Tascam DR-40 for £137 plus postage. Or just use your phone.

This enormous reduction in cost has had some wonderful results – it has democratised recording, for one thing, so musicians can work from anywhere at very little cost and the big music factories no longer completely control who makes it and who doesn’t.

But you couldn’t honestly say that everyone now has the technology needed to reproduce voice well, as the Covid pandemic has shown. The last year has created an interesting opportunity for broadcasters to experiment with out-sourcing tech provision and quality control, and the results are – well – patchy.

Take the Today programme on BBC Radio 4 – we were used to live inserts falling off air when Skype goes down, and even the presenters have been heard pleading on air for a return to getting guests on the phone because it actually works most of the time. But now some presenters are working from home, with better than average kit supplied by the BBC, and even they drop out from time to time.

Dropouts in the internet are always going to be with us – it’s a brave broadcaster that hangs its whole output on a shared, contended public service, and important live matter still has to go via leased lines or satellite for safety. But the other problem is latency – the time taken to encode, transmit and decode the audio. This puts people out of sync with each other, hence the recent spate of pip-crashing and awkward moments when both presenters speak, then both stop, and so on. One way to get round the dropout problem is to increase the buffer so you have some audio in hand if the internet hiccups, but of course that makes latency worse as well…

But even when the line holds up and the presenters aren’t caught out by the delays, there is still the problem of how to get acceptable audio quality from someone’s kitchen, spare room or cupboard under the stairs. Many broadcasters have tried hard – others haven’t. There’s a thread on Radio Today showing how some well-known names are hoping that a few towels, some blankets and/or a headset boom microphone will get them sounding right when they finally get to the listeners’ ears.

To be fair, with a casual ear and a transistor radio the result is not too bad in many cases. But the differences are there – studio quality is being replaced, much of the time, with something different.

Does this matter? Oh yes; get a decent high resolution feed (i.e. not most DAB streams) and listen carefully, and you will start to hear the room, the microphone and the artefacts introduced by the codec. Keep listening, and after a while you may find it hard to concentrate on what’s being said.

It seems likely that this same effect is at work, sub-consciously, on all listeners, whatever they are listening on. Even more so if they are listening via another lossy digital distribution process. It’s unlikely anyone will research this at the moment as the world has other problems, but I would bet there are similar effects in speech broadcasting to those discovered in music, where lossy encoding leads to reduced engagement with the music – people spontaneously clap along less, for example. And when the encoder is trying to encode not just the speech but the echoes and extraneous sounds from an untreated room this problem will get worse.

You might think this would apply in radio, but surely TV adverts, where the real money is spent, would be immune? Not so – put headphones on and listen to a good feed of an ad-break in mainstream TV (grim thought, but someone has to do it) and you will hear well-known voiceovers working in unsuitable rooms, changing the sound that has been established for the brand and no doubt affecting brand perception in the process.

All this is a long way of saying that if quality voiceover recording is important, it’s worth spending some time and money, and even leaving home, to get it done. Here at Read On we are covid-secure and have the best kit and a really well-treated room, so you can get a voiceover sounding the way she or he should.

It also means that we can do our own voice recording in Sussex, in comfort, and know that wherever it goes the editor or producer will hear studio quality. Just seeing that phrase, ‘studio quality’ makes me sigh with relief after the chaos on our airwaves in the last year.